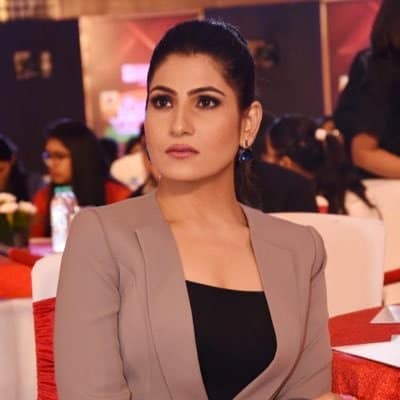 Rubika Liyaquat is an Indian Television News Anchor, Presenter, and Journalist. Rubika works with the ABP News. She is well known for her fantastic journalism skills, confidence, and attractive look.

Rubika was born on 18 April 1983 in Udaipur, Rajasthan, India. She belongs to an Islam family. She completed her schooling from St. Gregorios Senior Secondary School in Udaipur. Later she did a bachelor’s degree in Mass Media (Journalism) from the University Of Mumbai. Currently, she lives in Delhi, India.

In 2003 Rubika started her career as an anchor with channel 24 during his graduation studies. There she worked for three months.

In 2007, after her graduation, she began working with Live India. She worked here for one year.

In 2008, Rubika joined channel News 24 as an anchor and senior correspondent.

Later she joined channel Zee News. In which she was the anchor of the show “Taal Thok Ke.” She got fame for bringing out the facts of the Jindal family while working with zee News.

Currently, she is working with ABP news since august 2018. Here she started hosting the primetime show “Master Stroke.”

In April 2019, she became one of the journalists who take an interview with Prime Minister Narendra Modi.

In April 2012, Rubika got married to the Journalist Naved Qureshi. They both are from the same city (Udaipur, Rajasthan) and the same profession. Naved is associated with the channel Aaj Tak. They Have one son and one daughter.

Rubika is such a powerful and wonderful soul.

She is also a dog lover. She has her own dog named Romeo.

Rubika also likes to spend time and take selfies with her friends.